Dargle Conservancy hosted Pat McKrill and his box of snakes in early September.  He visited three Dargle schools, three Impendle schools and gave a presentation to farm staff at the Lion’s River Club.  Nkanyiso Ndlela who assisted and translated for the Dargle leg of the trip, wrote this account. Ashley Crookes, Barry Downard and Thabiso Mkhuliso took the photos.

The learners were very happy that the snakes are back. They came to us before we entered the class room and asked to see snakes. They really couldn’t wait to see them. the Principal, Ms Nondaba was very welcoming and explained how happy she is that the snake lesson was organized for them again this year.

I introduced Magic Mamba (aka Pat) who did his talk while I was translating in Zulu. Most of learners attended the snake lesson last year. They still remembered that snakes don’t chase humans and they are an important part of our environment.  They didn’t talk much, what they couldn’t wait to do was to hold the snakes. Busi Nondaba Prinicpal “It was excellent, and the additional excitement was to see the overseas python. I was able to carry it and feel it’s humbleness. Thank you for your unending support.”

Everyone was waiting for us when we arrived even the parents and community members came to learn about snakes. The Magic Mamba, as usual, started by asking a simple question: Who’s scared of the snakes and why?  Most of the community members put their hands up and all said they are scared of snakes because they bite, are dangerous, poisonous and an enemy of a human being – it is even written on the bible. 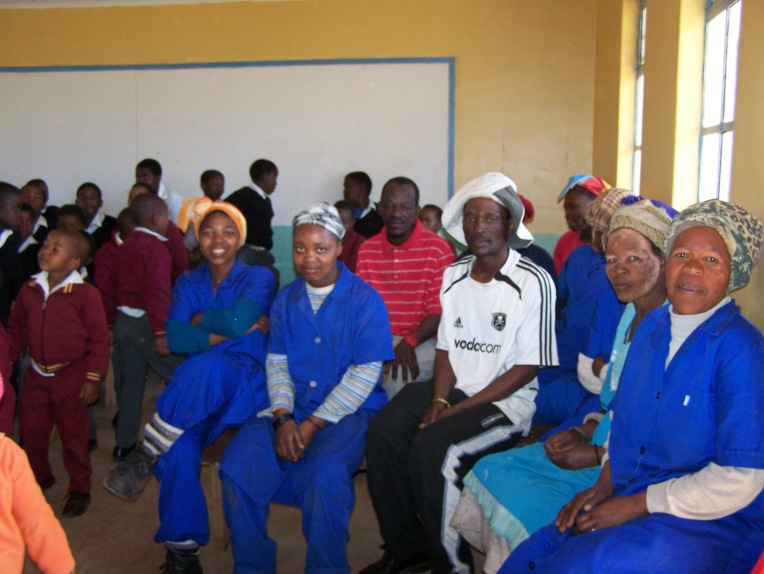 Pat did well in explaining that, while I translated. At the end of Pat’s talk, some of the learners and community members came forward and hold the snakes. They were very happy that they hold the snakes for the first time.  These pictures were taken by Thabiso who is a Grade 7 learner and was delighted when his dad stepped up to hold a snake.  Mrs Dladla (Principal) was fascinated by how many parents up: “It was a good idea to involve parents, they also need to be educated.” 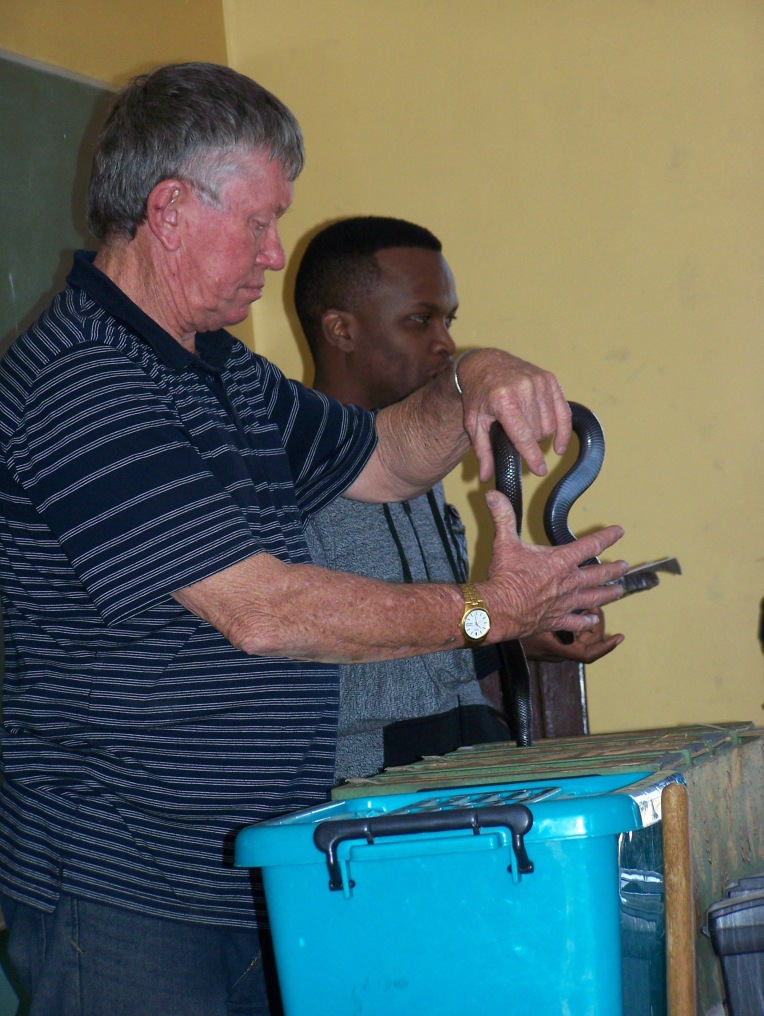 We were outside under a big tree, the learners sitting quietly and looking forward to learn more about snakes. Most of them held the snakes before and answered well when Pat asked questions regarding what he taught them before.

Some of the teachers were not a good example to the learners.  They kept on talking about superstitions in front of the learners – for example: There was a person long time ago who was eaten by a python; the snakes that Pat has are injected; snakes don’t bite white people and there is no snake that doesn’t not kill.

I had to correct that in a respectful way by saying I am also a Zulu person and I know that some of the beliefs are actually impossible. Anyway, the learners were not discouraged because they held the snakes and promised to respect them as they are part of our environment. Siyabonga Duma (teacher) was fully involved and set a good example to the learners by being the first to hold the biggest one.

Maureen Mabizela Acting Principal commented afterwards “Thanks we did enjoy the presentation. We are glad to know some of the things that we assume we know the answers to, but were wrong.” 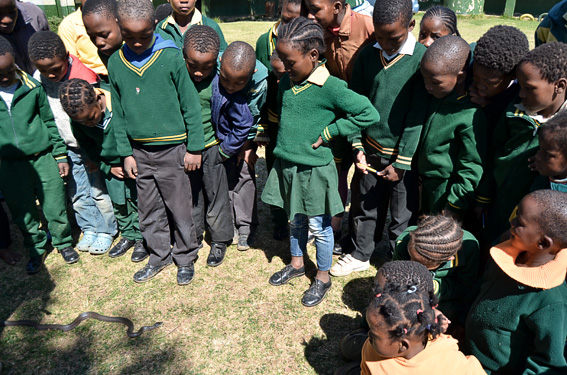 The Dargle workers and farmers looked exhausted but keen to learn more about snakes.

Everyone was very interested but didn’t like the question that Pat asked – Are we all going to hold the snakes? Old Gogos and Mkhulus seemed to be very worried at the beginning.

Pat did his talk and joked to make the audience relax. Many superstitions and questions were asked which I manage to explain. One old lady just stood up and walked away when Pat took out the big American boa constrictor.

Pat explained that snakes are the same and all need to be understood like any other animals. Some people came and held the snakes and some just wanted to touch and feel the body of the snake.

It was a good afternoon.  Robin Barnsley, Dargle Conservancy member said a few days later “My staff are still talking about it it. I thought the presentation was fantastic.”

A couple of days later Pat headed to Impendle accompanied by Eco-Schools facilitator  Zandile Skhakhane to do presentations at three of the schools Gomane, KwaKhetha, and Nhlabamkhosi which are part of Sam Rose’s Eco-Schools node. Despite it being Zandile’s first time as “snake assistant/ translator”, Pat found her good company was impressed that she settled in very quickly, showed confidence and was able to fit in with the programme like a veteran.  She took these pictures. 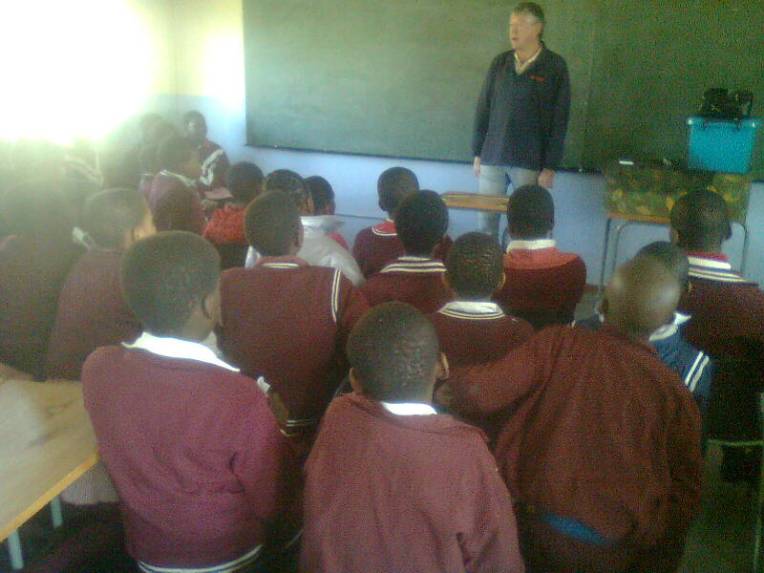 Pat comments: “There was very little in the way of English/Zulu translation required as most of the classes we spoke to were grade 5 + and the kids were, in the main, pretty competent in English and managed to follow my Anglo/Zulu commentary with the odd bit of fine-tuning from Zandile. There was a noticeable difference between the schools in terms of the general attitude, and demeanour of the pupils, and this was I think, a reflection of the staff attitude at the individual schools.

I spoke to the head at the  Nhlabamkhosi school and commended her on the cleanliness of the school and the exemplary behaviour of the pupils. I was very impressed and one would have to go far to find a school (no matter where) with sets such high standards and has such obvious pride in itself.

All in all, we had a good day, I think the environmental messages got through to most of the kids – and the staff – and we all had fun.

Mrs Shange at Gomane Primary said: “The kids were so excited, they love snakes now and they want you to come back again soon.”  Pat concludes: “Thanks Dargle Conservancy for the support on the ‘don’t kill the snakes’ crusade, much appreciated as always.”

2 thoughts on “Snakes Arrive for Spring”